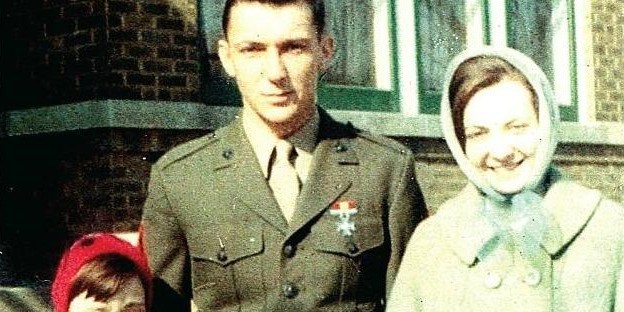 The doorbell rang on Thursday morning, May 16, 1968, at the Fitzmaurice home. It was 6 AM, but Michael was already awake. He was always up very early sitting in his favorite chair. he was always up very early and his favorite chair. He was spending a lot of time in that chair because sitting up was the only way he could partially relieve his labored breathing. On oxygen, and in the advanced stages of emphysema, Michael wasn’t able to stray too far from his chair. Lubitza too, was up early preparing breakfast for husband daughter, Ellen, who busy typing lesson plans for her student teaching sessions that she had scheduled for the day. Despite a busy morning household, visit at this time of day we’re certainly a rarity.

Ellen got up to answer the doorbell. “The first thing I saw was the Marine Corps car through the window and my heart sank. I opened the door to see a Marine standing there in his Class A uniform. He announced himself as Lieutenant Dial and asked to speak to my father. I pointed him over to Dad’s chair.” The Marine turned sharply and headed over to where Michael Fitzmaurice was seated. He stared at Michael for a brief moment before a deep breath to deliver the words, “On behalf of the Commandant of the Marine Corps I, deeply regret to inform you that your son has been killed in combat operations public of South Vietnam.

The words seemed to hang in the air for an eternity, as Michael turned and gazed at his wife, the silence only broken when Lubitza began to weep bitterly at the loss of her son. When Ellen began to cry the rest of the house awoke. “Timmy was killed,” Ellen sobbed to Jack as he came into the living room. The words stopped Jack and he fell to the floor. He had fainted upon hearing that his brother was dead. Ten-year-old Maureen came out from her room to see her family in complete despair and began to cry as well when told that her big brother was gone from her life. Jack was able to gather himself long enough to crawl back to his bed to dissolve in tears. Grandma and grandpa had heard the commotion upstairs and open their door to see the Marine Corps vehicle parked in front of the house. At the same time, their daughter, Lubitza, was collapsing down the stairs to tell them that her Timmy was gone. “You had to know Grandpa, Ellen recalled. He was very gregarious and demonstrative man. When he heard that Timmy had been killed, he let out a cry that our neighbors would have had to have heard. When I saw him in that much pain I began to cry even harder. Lieutenant Dial offered to go and help Grandma and Grandpa deal with their grief after he had listened to Grandpa’s loud cry.”

Although chaos reigned all around him, Lieutenant Dial stood steadfast in his resolve to inform Michael and Lubitza about the coming arrangements to get their son’s body back to Chicago and ready for burial. Ellen Fitzmaurice held her young sister, Maureen closely to her, rigid, listening while the Marine continued his anguished duty. Maureen Fitzmaurice’s childhood was dissolving with every word uttered by the young Marine officer. “Lieutenant Dial took very good care of our family,” Ellen said. He previewed the details of the funeral service; he gave us his home phone number; he warned us that a telegram would be arriving shortly confirming Timmy’s death. I remember Dad saying that he hoped that this was all a big mistake — until that telegram arrived later in the day.” The family’s devastation only deepened when they were informed that Tim had been dead for a week.

Excerpt from the book SMILE ON YOUR BROTHER – A FAMILY STILL HEARS THE ECHOES OF VIETNAM by Austin J. Nicholl with permission of the author, available on Amazon.

September 11 awoke us to the threat of terrorism. It was forever bookmarked in our history as the day when life as Americans knew it, changed forever.

The Eleventh Of September
Written by Roger J. Robicheau
We mourn their loss this day this year
Those now with God, no danger near

And to our soldiers now at war
God guide above, at sea, on shore

They are the best, I have no doubt
Our country’s pride, complete, devout

Bin Laden tried
To crush our land,
But we stood our ground
With our flag in hand.

Red for valor
And the blood that fell.
White for purity
Our heroes tell.
Blue for the justice
That will be done,
Proving once more
These colors don’t run.
And we’re still standing.

The GHOSTS OF THE GREEN GRASS tells the story of the ambush near LZ Albany, the second and largely forgotten half of the Vietnam War battle of the Ia Drang Valley in 1965. I was familiar with the battle at LZ Albany prior to reading this book. One of the kids who lived near my grandmother, in Chicago was killed there.

The battle at LZ X-Ray was immortalized in the book WE WERE SOLDIERS ONCE…AND YOUNG by Hal Moore and Joe Galloway and was dramatized in the 2002 movie “We Were Soldiers” which shows the U.S. troops’ heroic stand at LZ X-Ray. But the far bloodier engagement at LZ Albany followed, when the 2nd Battalion, 7th Cavalry was nearly annihilated. Of the roughly 400 soldiers in the battalion, about 70 percent were killed or wounded.

At first glance, this book seemed very interesting to me as it told the story of LZ Albany and the story of Custer and the 7th Cavalry’s defeat at the Little Big Horn. So, I obtained a copy and started to read. And it did not disappoint. He tells both stories expertly. Once I began reading it I was captivated.

“What happened out there was just a shootout in the grass, and man oh man, the enemy was ready for that fight, we were not,” said Joe Galloway.

On the day of the ambush, the battalion was strung out in a long column snaking its way through the jungle and tall grass, Galloway said. When a platoon captured two prisoners, the battalion commander decided to personally interrogate them, and he called all the company commanders and their first sergeants to converge on his position at the head of the column, Galloway said.

That left most of the rest of the soldiers leaderless when the enemy struck, racing through the column, killing anyone they saw. The result was chaos, said Bud Alley, a second lieutenant in the battalion at the time.

“There were no maps, no water; we had not slept for three days,” Alley wrote. “Everywhere one turned, you either stepped on a dead GI or dead NVA. Grenades going off, mortars and artillery coming in, and then jets and napalm.” When asked what memories from the battle are still with him 46 years later, Alley replied,” All of them: The noise, the screams, the confusion, the helplessness, the chaos.”

In all, it is a fascinating book and I recommend it to anyone who wants to know more about the battles in the Ia Drang in 1965.

The book can be purchased for $29.99 by visiting the website www.theghostsofthegreengrass.com

I have the honor of speaking at the Gastonia Rotary Club meeting on 19 July 2018 about my book WHEN WE CAME HOME, How the Vietnam War Changed Those Who Served.

It is a special honor because July 19th is the 47th anniversary of my friend Rick Page’s death during a rocket attack on Phu Loi.

Feel free to join me. The meeting begins with a buffet lunch at 12:00 followed by the general meeting. I will speak at 1:00 for 30 minutes.

I went to a big reunion in Houston in 1987. I was out walking in Hermann Park by myself with my “Donut Dollie” T-shirt on when I saw a man coming toward me. A lot of the veterans at reunions wear fatigue jackets and hats, but this one was nicely dressed in khaki pants and a polo shirt. He had on big sunglasses that prevented me from seeing his eyes, but the closer he got to me, the more aware I became that he was crying. He was so choked up he could hardly say more than “Excuse me, excuse me.” He stopped me and stood there and cried, tears just rolling down his face and onto his shirt.

“I just feel so bad,” he said. I told him that one of the reasons we were together was to get our feelings out, to talk about them.

“I never told you girls thank you,” he sobbed. “I never said thank you:· He had been at Lai Khe with the Big Red One. He remembered the Red Cross girls in those bright blue dresses jumping off the resupply chopper.

“God,” he said, “I can’t tell you how it felt. You smelled good and you were laughing. We’d been out there for weeks and were really down. You made us feel so good when you left us a calendar or a paperback book, or maybe just a pencil. It just felt great because we had to be gentlemen when you were there. We weren’t animals, we weren’t killers, we were people again. When you got on the chopper to leave, we all said out loud or to ourselves, ‘That’s what I’m going home for. That’s who’s waiting for me when I get home.’”

Perfect strangers come up to me at reunions and just talk and talk and talk. It doesn’t matter if I was in Vietnam at the same time or place they were. What matters is that I was there at all. They’ll say, “You came to my bedside and you held my hand and you wrote my mother, or you came out to visit my unit.” They don’t mean me specifically. They mean the collective me. Me, the Red Cross girl.

I still get letters from veterans who had really bad experiences in Vietnam. One, in particular, an Americal Division company commander from Louisiana, writes and calls me now and then. He lost sixty-eight people in his company in one night. He’s been divorced three times and just can’t seem to get it together, but he knows I understand his pain and he trusts me with his feelings and memories.

Was the war worth it? In a personal sense, it was for me. I learned a lot about myself and about life and commitment to others, but it was different for the nation. If we ever get ourselves into anything that stupid again. Vietnam was worth nothing. I would not ever want my sons to be in such a futile situation. Vietnam truly drained the youth out of so many people whose lives are never going to be the same. A lot of veterans lost their friends and part of themselves there, and I think they know they will never recapture what was left behind.

WHEN WE CAME HOME
Blog at WordPress.com.